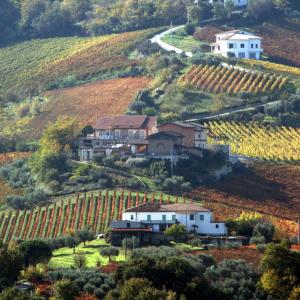 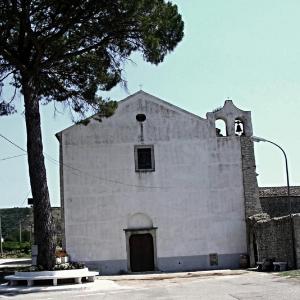 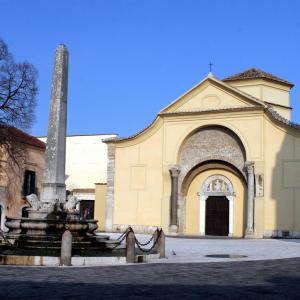 A route of about 55 km, accessible by bike, car or on foot, that goes through the northwest area of the Province of Benevento, from Faicchio to Pietrelcina.

The first stage is dedicated to a visit to Faicchio and S. Salvatore Telesino, rich in historical remains of the Samnite, Norman and Longobard eras, and then goes through the famous spa town of Telese Terme and the wine production area of Castelvenere.

After visiting the remains of a Roman bridge and the churches of San Lorenzo Maggiore, the second day of the itinerary includes a visit to Benevento, an open-air museum whose impressive monuments testify to a glorious past.

Following the Via Appia Traiana and a few secondary routes, you reach Pietrelcina, a fascinating village of ancient origins which is the birthplace of Saint Pio; in the surrounding area you can visit the towns of Cerreto Sannita, Guardia Sanframondi and Castelvenere.

STAGE 1 - FROM FAICCHIO TO TELESE TERME

The route starts from Faicchio, located at the foot of the Mount Monaco di Gioia, which some scholars identify as the ancient Samnite town of Faefola, mentioned by Livy. It was conquered in 183 BC by Quintus Fabius Maximus, after whom the two-arched Roman bridge on the Titerno river is named.
In the Norman era it was a fief of Guglielmo Sanframondo, then of Giovanni Mansorio, and finally of the De Martino family, who held it until the abolition of feudalism. After the Unification of Italy, the area was affected by the phenomenon of banditry (1861-1863), as bands of brigands sought shelter in the numerous gorges in the area.

The route continues towards S. Salvatore Telesino, which takes its name from the homonymous Benedictine Abbey, founded by the Longobards and recently restored. It achieved great fame and both Ruggero the Norman and Saint Anselm, Archbishop of Canterbury, were guests of the abbey.
The Grassano Park is well worth visiting. It stretches over an area of over 120,000 sqm, and the Rio Grassano runs through it, providing ample opportunity for water sports.
On the route leading to the nearby Telese Terme one can admire, as in an open-air museum, remains of the walls of the ancient  town of Telesia, which at the time of the Punic Wars was occupied by Hannibal and then recaptured by Quintus Fabius Maximus, as Livy reports in his Annals.

The route continues towards Telese Terme, the most important centre of the Telesina Valley. It is a spa resort famous for its sulphurous-bicarbonate-alkaline springs generated by an earthquake in 1349. The emission of unbreathable, highly sulphurous gases led to people abandoning the original inhabited area and settling in the current location.

The next section of the Southern Via Francigena route in the Sannio Beneventano area goes through the wine production area of Castelvenere, and follows the valley floor to the church of Santa Maria della Strada.

The Church of Santa Maria della Strada is located in the Municipality of S. Lorenzo Maggiore, a town set among vineyards and olive groves, and famous for its production of excellent oil and wine. The origins of San Lorenzo date back to the 16th century.

The route continues towards Ponte, a town in existence since Roman times and which takes its name from the stone bridge, "ad pontem lapideum", on the Via Latina which connected Rome to Benevento. Nearby one can visit the Abbey of Sant'Anastasia, perfectly preserved in its severe elegance, a national monument dating back to the Longobard era.

We soon reach Benevento, an inner province of the Campania Region located between the Sabato and Calore rivers, with a rich history and magnificent monuments bearing witness to century upon century of glorious events.  It is a city that can truly be called an "open-air museum".
Known as the city of the "Witches", also because of its famous local liqueur, the history of this magical city can be summarized in three main periods: the Roman, Longobard, and Pontifical eras. Each period has left an artistic and historical heritage of great value. The Trajan Arch was built between 114 and 117 AD to celebrate the victories of Emperor Trajan and the construction of the Via Traiana, which shortened the journey between Benevento and Brindisi; the Roman Theatre, commissioned by the Emperor Caracalla,  is famous for its excellent acoustics.
In the Longobard period, the city was elevated to the status of Principality by Arechi II, who, as a lover of the arts and culture, commissioned many architectural works: among them, the Church of S. Sofia, with its beautiful cloister, today a UNESCO World Heritage Site.  Longobard domination gave way to Pontifical rule: architectural works of this period include the majestic Rocca dei Rettori castle, the Cathedral, Paolo V Palace, the Basilica of S. Bartolomeo, and the Basilica of Madonna delle Grazie. With the Unification of Italy, Benevento was freed from Pontifical domination and was declared a Province of Italy by the decree of October 25, 1860 issued by Giorgio Pallavicini.
The Hortus Conclusus, in the garden of the former convent of S. Domenico, in Guerrazzi Square, deserves a visit: it is a set of significant sculptural elements by the artist Domenico Paladino, which together constitute a single complete work.

We take the Via Appia Traiana, which unfortunately in the first stretch has been overlaid by a new state road, with no alternatives available, and leave it after a few kilometres, to take secondary roads that lead us to the discovery of a rolling, sweet and varied rural landscape, with vineyards, olive groves and pastures as far as the eye can see. With its boundless horizons, the landscape is the main interest of this stage of the itinerary.
We reach Pietrelcina, located on the bend of a tributary of the Tammaro river. This town is famous around the world because of Francesco Forgione, Padre Pio da Pietrelcina, being born here on May 25, 1887. He was canonized by Pope John Paul II.
Pietrelcina, perched on a rocky outcrop, is a rural village of ancient origins that still retains a distinctive charm. It was first mentioned in a document of 1101. Through the centuries the village had different feudal lords, among them the Caracciolo, D'Aquino and Cafara families, and the famous jurist Bartolomeo Camerario. Since the Unification of Italy in1861, it has belonged to the Province of Benevento.

Just off the route, it is worth visiting the Municipality of Cerreto Sannita, a town that was entirely rebuilt after the terrible earthquake of 1688. It still displays the original urban layout and is famous for its traditional production of artistic ceramics.
The first documented news about the origins of the town date back to the 12th century, in the Norman era, when it belonged to the Sanframondo family. It then became a fief of the Carafa family, who kept possession of it until the abolition of feudalism. First annexed to the Province of Terra del Lavoro, after the Unification of Italy it became part of the Province of Benevento.

Well worth a visit is also Guardia Sanframondi, a town of Longobard and Norman origins, which has preserved its characteristic Medieval appearance. The current town was built around the castle commissioned in 1139 by the Norman Raone, founder of the Sanframondo family. Recently restored, the fortress retains its original majesty and grandeur. The village belonged first to the Sanframondo family, until 1483, then to the Carafa family, who kept possession of it until the abolition of feudalism in 1806.
The town is located among the vineyards and olive groves that cover every hill and corner of this territory. This is a land of famous and homonymous wines of controlled origin, which represent the main economic resource of the town.
The Sanctuary of the Assunta holds, among other works of art, a wooden statue of the Virgin, in honour of which Penitential Rites are carried out every seven years. Because of their great mystical and folkloristic interest, these rites attract tourists and believers from around the world and are also the subject of anthropological studies and research.

Nearby, set in a green rolling landscape, marked by straight rows of vines as far as the eye can see, is Castelvenere.
Various sites bear witness to the continued presence of human settlements in this area since Prehistoric times.  A famous Longobard centre, it is renowned as the birthplace of Saint Barbatus, Bishop of Benevento, responsible for the conversion of the Longobards to Christianity.
It was a fief first of the Sanframondo and later of the Carafa family, who kept possession of it until the abolition of feudalism. After the Unification of Italy it was annexed to the Province of Benevento.